Diary 1  ·  1773–1781  ·  This volume covers the years in the village of Coltishall, seven miles north-east of Norwich. For Mary Hardy, her husband and their young family it is a story of hopes and ambitions which have yet to come to fruition.

The FRONT COVERS of the complete series of Mary Hardy volumes are pictured on the Home page.

You can buy the books from this website or from Amazon.co.uk.

In this volume the diarist’s husband William is a tenant farmer with 60 acres. He is also manager of a small maltings and brewery owned by John Wells, a Norwich merchant.

Home and work were integrated in this period. An emergency at one of the Hardys’ tied houses brings this out clearly. The Recruiting Sergeant at Horstead lay half a mile from their home. 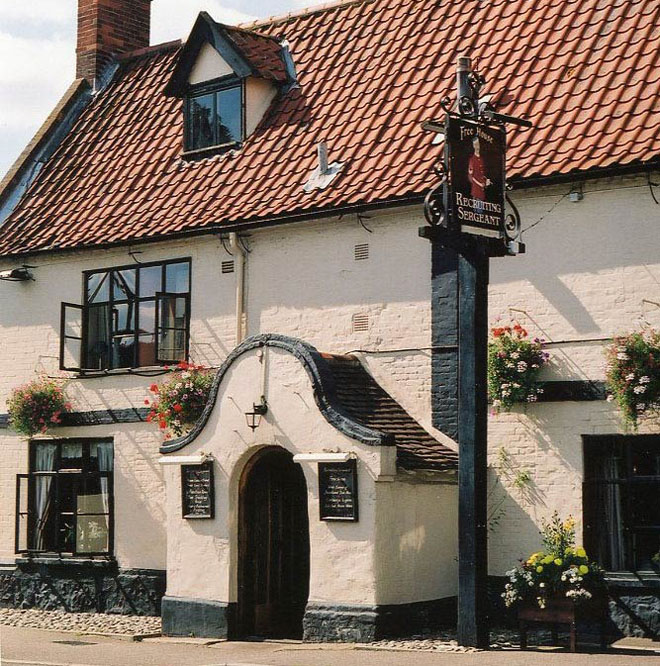 The Recruiting Sergeant, at a major crossroads. As was common there were innkeeper problems in 1776. The last one had left, with no replacement being found for two months. The Hardys stepped in, Mary Hardy bringing their young children to the pub while she worked

Cooking for seventy and 18-hour days

During the Coltishall years William Hardy was at “the Serjeant”, as his wife calls it, almost every day. Like the King’s Head on Coltishall’s riverside, it was one of the principal business and leisure hubs of the area.

The house catered for a good passing trade. On the opening day of the great St Faith’s Fair, the largest stock fair in the county, huge numbers of customers would congregate there. The toll on the small number of staff was immense.

And one of these was Mary Hardy herself, cooking for seventy and on her feet for eighteen hours at a stretch, from 8 am to 2 am the next day. An interregnum between innkeepers had occurred suddenly. The brewer and his wife stepped in; also one of the farm servants Zeb Rouse and his wife Molly, who had been Mary Ann Hardy’s wet nurse.

On the eve of the fair in 1776 Mary Hardy worked at the public house from lunchtime and had to stay all night, the house being “full of company”. There was no respite the next morning:

“October 17, 1776  ·  Mr Hardy and I at the Serjeant all day, roasted near five stone of pork, drew a barrel of nog [strong beer], two gallons of rum, two bottles of gin and a small quantity of wine and brandy.”

The Hardys found a new tenant, William Breese of Horsham St Faith. However he brought nothing but problems. Mary Hardy tried to settle him in with a handover, staying till midnight on 27 November 1776. He and his friend ran up a huge bill that day of well over £1 (more than three weeks’ wages for a working man) “and left it unpaid”.

Breese and his wife Hannah moved on after only two years. They took the King’s Head at Worstead, another Hardy tied house. He ran up further debts to the brewer and was imprisoned for debt in Norwich Castle in 1779.

William Hardy was determined to expand and find new markets. In 1776 he built a sailing barge (a wherry) to carry coal upriver from Great Yarmouth and his produce back down to the seaport. Some of his malt was then taken by sea to London.

The new navigation upstream to Aylsham opened in 1779. An extension of the canalised River Bure, it damaged Coltishall’s pre-eminence as an inland port. This page’s banner shows the navigation at Oxnead. The website of the Bure Navigation Conservation Trust depicts this former waterway with a wealth of archive photographs.

Trade on the rivers is explained further in volume 4 of the commentary, which also records the boisterous launch of the Hardys’ wherry William and Mary.

Misty dawn, at anchor. The wherry Hathor, built in 1905 for Mary Hardy’s descendants Ethel and Helen Colman, was designed to take passengers, not cargo. But this beautiful vessel has the lines and rig of a trader

Smallpox inoculation and other problems

William Hardy’s hardworking wife coped, at some cost to herself, with all the problems that came their way. She nursed her younger two children through a hazardous smallpox inoculation administered by a woman in the village.

She had to watch helplessly as William and Mary Ann suffered for many days while the large, painful pustules developed and their faces swelled. William, aged six, had 50–60 pustules, which his mother considered “but few”. His sister, aged 2½ and “very full of the smallpox”, was almost blind. She was seriously ill for a fortnight.

These were the days before the Jenner vaccine. The parish clerk’s eight-year-old daughter died of the disease while the Hardy children were undergoing inoculation. Zeb and Molly Rouse’s eighteen-month-old son went down with it, but pulled through. Smallpox and tuberculosis carried off the young in great numbers.

The diarist, sought after as a nurse and comforter, also attended the labour of her close friends. The mothers lived; some of the babies did not.

The highly eccentric curate and yet more drink-prone and indebted innkeepers added to the diarist’s load.

In 1779 Mary Hardy’s elder son Raven started as a weekly boarder at the grammar school at North Walsham, the town where at fifteen he was to be articled to an attorney.

Young William, left behind at the village school, fell out with his schoolmaster. Aged nine, he never resumed regular daily schooling.

Meanwhile the Hardys’ quest for a farm, maltings and brewery of their own continued to dominate her record. Her husband journeyed to Norwich and Great Yarmouth, to central and north Norfolk and into north Suffolk in pursuit of a new life.

Went to the new river to see the lock, carried the men two bottles of gin  (Mary Hardy, 1774)

Our books are available through selected bookshops.

You can also buy through
www.Amazon.co.uk/

You can post us a direct payment by cheque

We use cookies on our website to give you the most relevant experience by remembering your preferences and repeat visits. By clicking “Accept All”, you consent to the use of ALL the cookies. However, you may visit "Cookie Settings" to provide a controlled consent.
Cookie SettingsAccept All
Manage consent

This website uses cookies to improve your experience while you navigate through the website. Out of these, the cookies that are categorized as necessary are stored on your browser as they are essential for the working of basic functionalities of the website. We also use third-party cookies that help us analyze and understand how you use this website. These cookies will be stored in your browser only with your consent. You also have the option to opt-out of these cookies. But opting out of some of these cookies may affect your browsing experience.
Necessary Always Enabled
Necessary cookies are absolutely essential for the website to function properly. These cookies ensure basic functionalities and security features of the website, anonymously.
Functional
Functional cookies help to perform certain functionalities like sharing the content of the website on social media platforms, collect feedbacks, and other third-party features.
Performance
Performance cookies are used to understand and analyze the key performance indexes of the website which helps in delivering a better user experience for the visitors.
Analytics
Analytical cookies are used to understand how visitors interact with the website. These cookies help provide information on metrics the number of visitors, bounce rate, traffic source, etc.
Advertisement
Advertisement cookies are used to provide visitors with relevant ads and marketing campaigns. These cookies track visitors across websites and collect information to provide customized ads.
Others
Other uncategorized cookies are those that are being analyzed and have not been classified into a category as yet.
SAVE & ACCEPT
Powered by